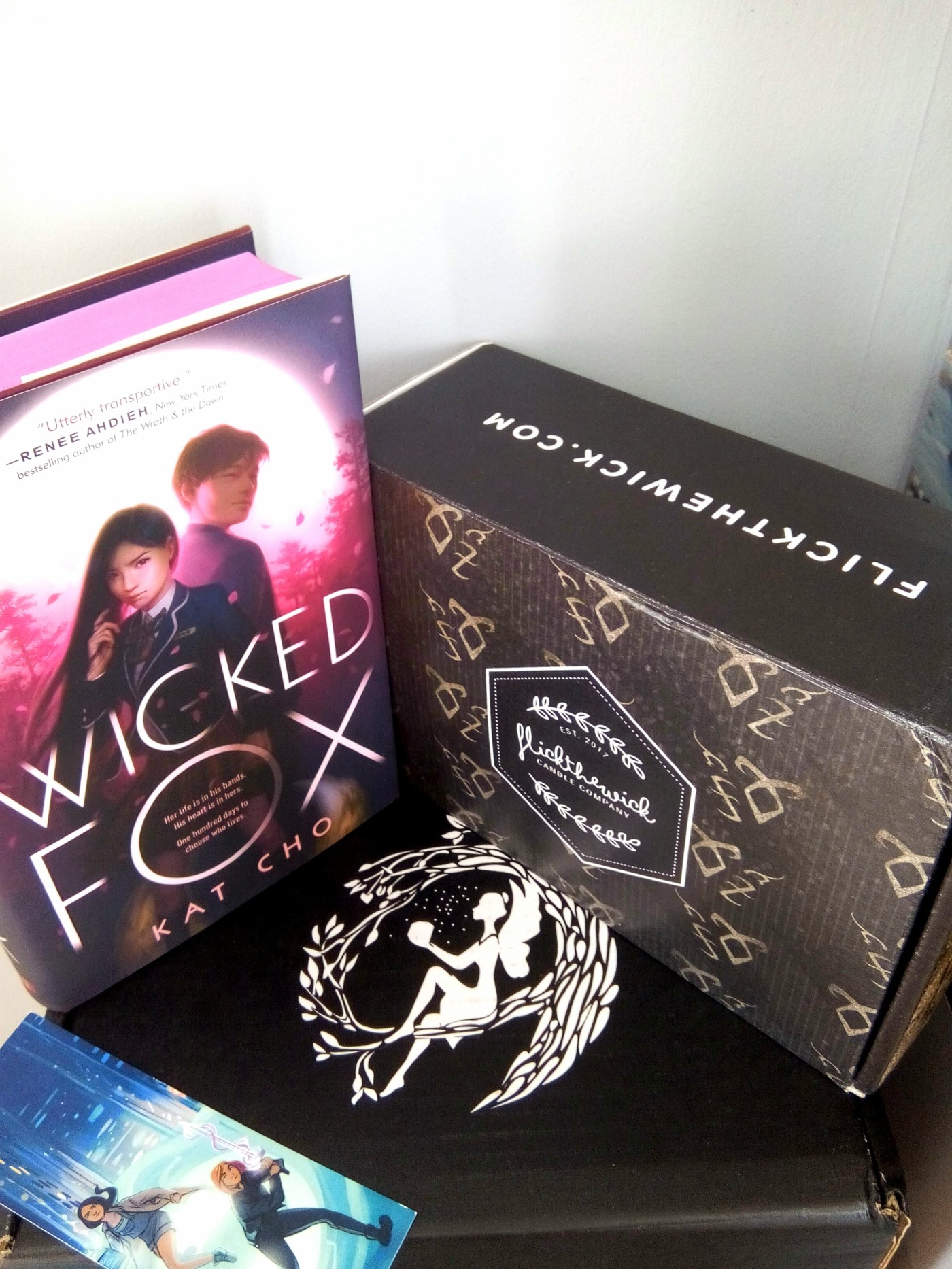 Hello everyone ! 🌞 I hope everything’s fine for you ! I come to you all with an article inspired by Xandra @ Starry Sky Books. I read this article a while ago and I thought it would be nice to talk about my experience with book subscription boxes.

Actually, I did not subscribe to any boxes but I did order boxes twice in the past months, it is what they call a « single purchase ». So here, I am going to talk about my experience with them : the delivery, the price, the items and so on.

The very first box I ordered was a Flick the Wick box, « a book inspired candles company » and it was in November 2018 for the theme « Shadowhunters ». I placed my order the month before, on October 1st, and I was not sure about that but it was my birthday month so I gave in to temptation… The reason why I hesitated is the shipping price. The company is based in the US and I live in France… The box itself was $35 and even though I wanted to treat myself, it was clear for me : I had a limit, if the shipping was more expensive than the box, then I would not buy it… But (thankfully for me, sadly for my bank account) it was not ! And, you guess it, I clicked the « place your order » button ! The torture ? Waiting the end of November to have it. Because yes, that is how it works : you pre-order at the beginning of this month the box for the following month and they usually ship it near the 20th of the same month. Is that even clear ? I hope it is !

As if the long wait was not enough, I obviously had troubles with the delivery… This had nothing to do with Flick the Wick but with the French post office. I tracked my parcel everyday, hoping for a good news and it finally came but my mailbox was empty… It was on a Saturday so there was nothing much to do, I was able to call the post office center before it closed and they explained that it was nothing unusual, that even though the tracking said it was delivered it was not impossible it was indeed delivered but to the center, not to me (I was like « wtf »)… So I spent the weekend being nervous and thinking only about my future items… I even got spoilers for some of them (well, the impatient me was actually so frustrated and afraid not to receive it that she watched an unboxing… I was punished soon enough and got even more frustrated so I stop before knowing all of the items).

My package finally arrived on the Monday after that, wrapped in bubble paper and in good condition. I was actually very surprised by the size of it : it was pretty tiny ! But you know what ? It doesn’t matter because what was inside was awesome !

I won’t list all the items but look at this :

Now for the next box I purchased : it was a Fairy Loot box and I placed my order in June for the box of July which was « Magic in the City ». To tell you the whole story, I saw the May box with the exciting theme of « Unlikely Romances » with items from my favorite duology of all time : The Wrath and the Dawn… and the book featured looked SO interesting ! Unfortunately, I did not buy it and seeing unboxings made me regret that… So in June when the July theme was announced with a Shadowhunter ceramic mug I knew I had to treat myself again… I was in the middle of revisions and I was happy about them so knowing I would have a Shadowhunter mug got me even more delighted.< Anyway…

I was really tempted by a subscription for Fairy Loot because their books are always gorgeous, the items are of great quality, they work with authors and their artist is one of my fave (it is taratjah on Instagram) but being a college student, I’d rather spend the money elsewhere… The single purchase was £26 and since it is a British company, the shipping price was cheaper !!

Talking about prices, you should know that rep codes do not work for single purchase. You probably already know that but I did not.

I was satisfied with the shippement : it was not too long and my package was in good condition. The only thing that got me disappointed (that’s a big word) is that I received the box without wrapping… The boxes are delivered as it is : a box, a sticker on one side with the delivery informations. That’s a small detail because the shipping was not expensive at all and since the box was not damaged, that’s ok !

The items were pretty good : the much-desired Shadowhunter mug designed by Taratjah and a mug rug to go with designed by Obsidiayan and inspired by the book featured in the box, a cute purple purse, a Harry Potter necklace and tarot cards by oweana.art , a pin banner insired by Percy Jackson and designed by Ink and Wonder. There is always a fan art inspired from the book included in it and this one was designed by kavon_kayleigh.

The book included ? Wicked Fox by Kat Cho, which sounds so interesting !

There was also a fortune cookie, but as you might guess, I already ate it and it was great ! Mine said « Never trust a duck » which is from The Infernal Devices by Cassandra Clare…If you are here for some time (thank you), you know my love for these books (and my purchases of these two boxes also show that too) so it was rather funny to see this quote.

Alright, that’s it… If I wondered why I was not a bookstagramer, those pictures made me even more certain that I should not. It was a bit complicated for me to organize this post, maybe I should have included individual pictures for each item ? If I ever do another post like this one, I’ll think about it.

What about you ? Are you an active subscriber ? What’s your favorite company ?

Until next time, take care xx